My cherubs and Me
All about our lives 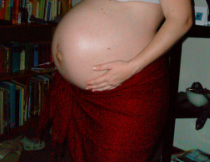 38 weeks with B
We started trying for a baby once I turned 30 and it took 11 months to get pregnant with her. I was quite franctic by the time I found out I was pregnant, having imagined all sorts of fertility problems but we finally got it right without medical intervention.

When I started trying to get pregnant I began reading pregnancy books and finding out about natural birth. When I realised I was pregnant I booked a place with a private midwife at Birth options in Plumstead, Cape Town. I wanted to have a natural active birth, in a hospital in case of problems and where there were drugs for pain. The midwives there work with Dr Dumbrill (an OBGYN) at Vincent Palotti hospital in Pinelands.

My first check up was at 13 weeks at the fetal assesment centre at Kingsbury hospital. We saw baby B and they said she was a girl. ( I was thrilled, since I wanted a girl first). I did all the blood tests etc and then at 17 weeks I met my midwife Glynnis (who was amazing), she's so calm and reassuring.  Midwife check ups are cheaper than gynae ones, which is another bonus. I decided I'd like a water birth at Vincent Palotti.
At 20 weeks I had another baby scan at the fetal assessment centre at Kingsbury. At 24 weeks I finally met my back up gynae for an appointment. He checked me out and made sure I knew what to expect etc in case something unplanned happened and he would need to step in.

I had a normal pregnancy (morning sickness, swollen ankles, exhaustion, constant hunger, irritable uterus and leg cramps), only problems were a couple UTI’s. At Dr Dumbrill’s 36 week appointment he suspected Becca weighed 3.5kg’s already. So at 38 weeks I started all the tricks to trigger labour as the smaller the baby the easier the vaginal delivery. I tried curry, pineapple, walks, sex, egg plant nothing happened.

We decided at 40 weeks we would go in to hospital and get prostaglandin put on my cervix to ripen it and hopefully trigger early labour. I would go home and carry on naturally from there.

So at 40 weeks, the 12 November we went in to hospital and did the gel. It immediately triggered a bad reaction from the baby and some contractions so they wiped off as much gel as possible. Baby calmed down and we monitored her for 2 hours, all seemed well and we headed home.

I had contractions all through the day, at 7pm my midwife popped in to check if there was any progress and I was 1cm dilated and had a little bloody show.

I had contractions all night and a lot of blood but at some time in the night the bleeding stopped though the contractions continued. I could not sleep through them. In the morning I decided it was time to go to hospital.

When we got to hospital I was still only 1cm dilated,  they monitored for a while and said that the contractions were too strong for me to go home. Some time in the morning the bleeding started again so I was progressing, just very slowly. In the afternoon they did a scan and I was very low on amniotic fluid. There was a planned induction for 8am Friday morning. I was given pethadine and told to sleep with continual fetal monitoring.

At about 10 that (Thursday) night the serious contractions hit, I was writhing in pain strapped to a hospital bed. My water had broken but little was coming out as she was well engaged. They called my midwife and I went to the labour ward. I was finally past 3cm. I could handle the contractions if I was sitting but lying down they were bad. Unfortunately Becca kept on showing warning signs of fetal distress so they wanted me lying on the bed with a fetal monitor on for the next 2 hours. I opted for an epidural. An hour later with the epidural in everything was good.

Except for more fetal distress. We had an emergency Caesar at 1 am. I only got to 5cm dilated. Becca was born at 1:38 on the 14th November. She weighed 3.98kg and 52cm’s. She had good agpar scores and was absolutely fine and adorable. 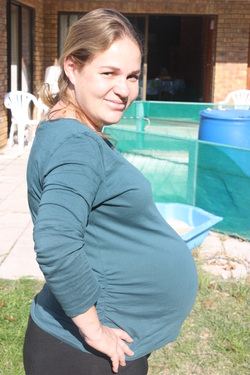 photo taken the day she was born
When I found out I was pregnant again I was planning on going right back to my midwife and trying for the natural birth I’d wanted with Becca. I wanted a VBAC as I really struggled with the Caesar recovery, it took me forever to be able to get out of bed by myself and it was sore.
At 7 weeks I went to my gynae and we looked at the baby, my dates were spot on. Unfortunately he informed me that I could have a VBAC if I wanted but he would have to be there as it was now a high risk pregnancy and birth (because of my previous Caesar). My medical will only pay for a midwife or a gynae so there went the midwife plan. I saw Dr. Dumbrill for my pregnancy.

We did the Nuchal scan at 13 weeks then a 20 week scan then I saw him again at 26 weeks. I had no problems so no need for more appointments. Aside from severe headaches and taking baby aspirin and iron tablets for slight anaemia everything was fine. I saw him again at 32 weeks, then 36 weeks.

I must add that there were no problems But I did find this pregnancy much harder. My feet and ankles would swell enormously. I would lie down from Friday after work and by Sunday they would be less swollen. Then after Monday they would be bad for the week again. At work I was on my feet most of the time and I didn’t want to sit as I had extremely nasty hemorrhoids. I was also really tired but that’s what happens when you’re pregnant with the second child because the first child keeps you very busy.

At 37 weeks I had a tummy bug, I went in to hospital to get checked out as I couldn’t keep anything down and this caused contractions. After monitoring and an injection for vomiting and diarrhea the contractions stopped and I went back to work the next day. From 37 weeks I was trying everything to go into labour naturally as again the smaller the baby the more chance of a successful VBAC.

At 38 weeks (Monday) I saw Dr. Dumbrill again and I said I was concerned about a VBAC with such bad hemorrhoids. (I was way too scared to push) He said must choose and phone and confirm but we’d book a Caesar for 39 weeks in case I changed my mind. I did. Laria was already 3.5kg at 38 weeks. He also asked me if I was going to have her over the weekend as he was away and I said no, she was waiting for 40 weeks like her sister. Haha

On the Saturday I took Becca for a walk to the park, my friend also came over and took maternity photos of me. An hour later 3pm I needed to pee, I went to the loo then lay down and needed to pee again after the 3rd time I suspected my water was broken. Laria was well engaged so when I stood up no water came out but when I lay down some water trickled out. I told my husband who didn’t believe me (I was way too calm). At 4pm the contractions started and they were official contractions. None of those piddly ones I had with Becca, I was in labour but I wasn’t going to hospital till I had proof. (I had to labour at hospital in case of uterine tear.) I found a contraction timer on the internet and the contractions were consistently 6 minutes apart.

At 6pm I had a bloody show. I told my husband to get ready and went to have a shower and wash my hair. I asked my dad to look after Becca and we left for the hospital. The 30 minute drive to the hospital was bad, it was sore. I needed to squeeze Mario’s hand to help control the pain which was difficult with him driving. At hospital they checked me in. Baby doing fine, definitely in labour. (They did not check how far I was dilated since I was booked for Caesar which I regret cause I still wonder if I should have tried for a VBAC) They called the on call gynae and paed etc. I labored till 8:20 or so when finally I was wheeled into surgery and they did a spinal. 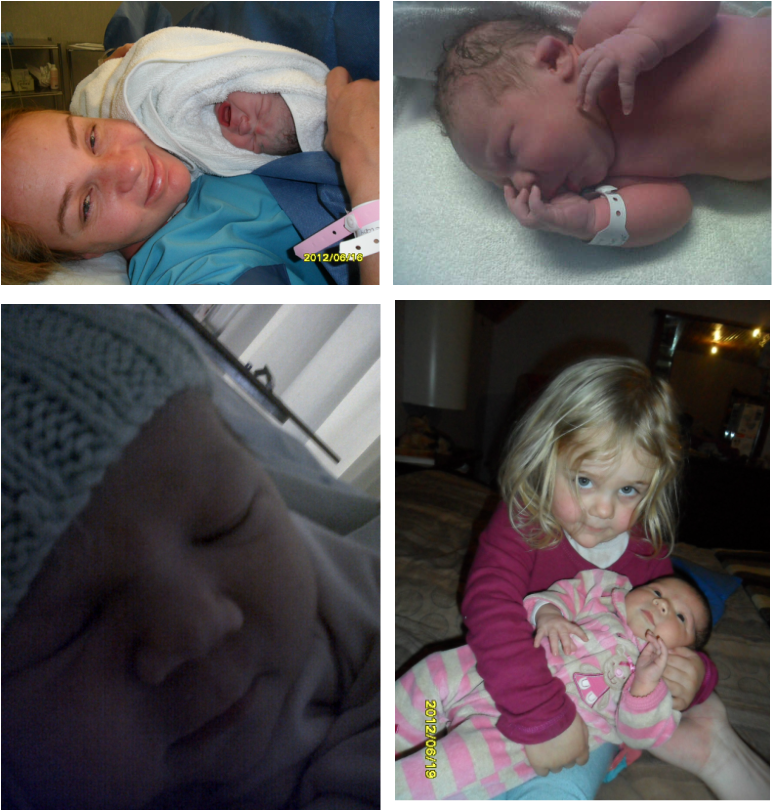 Create your own unique website with customizable templates.
My cherubs and Me